Why is it that when I am home and need to make dinner or tend to Olivia or just sit down for a minute Zachary takes a 30 minute late afternoon/early evening nap but when I go out for the evening he sleeps for several hours? I am not complaining that last night when I finally had a reason to leave the house by myself that he slept well I just wanted Rob to get a little time in with both kids since he has been so busy. I left just before 7 after putting Zachary down around 6:30 and he woke up minutes after I returned at 9, which of course meant we didnt get him down for the night until close to 11. Feeding baby food to a baby at 10:30 is not my idea of fun! He did sleep until just after 7 this morning though so I did get some uninterupted sleep which was nice.

Zachary has a tooth! He didnt act like it bothered him much, in fact I only noticed it because the spoon made a funny noise in his mouth while I was feeding him. He also has learned how to pull up on things, I swear he thinks he is three not 6 1/2 months. In fact I found him standing in his crib yesterday morning which promptly got his crib lowered, now he still stands up but there isnt a danger that he will fall out, at least not yet…

Olivia told me she had crumbs in her eye yesterday morning, after looking at her strangely I realized she had sleepy dust in her eye. It was pretty funny though. She also has decided to count in Spanish, I guess Dora and Diego must be teaching her something.

I have been fighting a cold, I dont think Olivia even noticed that I was whispering all day on Monday. Whispering doesnt have the same effect when you are trying to get your point across. I have Enrichment meeting tonight, its a decade game based on when you graduated so it should be interesting. We had a great dinner at our house last Friday with a dinner group from the ward, it was fun to get to know some people better and it was a great excuse to really clean the downstairs.

Rob got our fence in so now he is going to work on his shed. It has been really cold the last few mornings and I think getting the shed done means his car will fit back in the garage so he wont have to scrape his windows!

We left the hotel bright and early Monday morning to drive home. Zachary who had been so good in the van the whole vacation decided that he had had enough and cried and screamed the whole state of Utah. We were glad to get home and get out of the van. I dont think we will be taking a road trip again for a while but it was a super trip. Thank you so much to Richard and Linda for the great hospitality and super food! We loved staying with you guys.

Now that I have finally conquered getting our vacation on here I am going to try to keep our blog updated a little more frequently. Our kids are doing great, Zachary is crawling everywhere and is pulling up on stuff. He thinks he is two! He devours baby food but his favorite things are the Puffs cereal snacks that Gerber makes. He gets so excited when he sees them. Olivia is just a spunky two and half year old. According to her doctor her verbal skills are VERY advanced so I am working on teaching her some beginning preschool ciriculum. She has gone to nursery by herself the last two weeks happily so that makes Rob and I very happy. She loves to watch Dora the Explorer and Go, Diego, Go now that we have dish network. Rob is busy with work and getting ready to take his professional exam. I am glad to have Jen here to help since he is working such long hours. We are almost ready to put in our fence and get started on building the shed before it gets too cold. I am just busy with the kids and housework, it never seems to all get done in the same week!

Sunday morning we made doughnuts, yummy yummy doughnuts! Richard and Linda’s daughter Carrie, her cousin (and my friend) Bridget, Bridget’s new baby Lydia, and Bridget’s mom came to visit us, it was so great to see them all. We got the van packed up and were on the road for our long driving day. We were sad to leave our vacation but excited to be on the way home to our own stuff, too. We stopped for lunch at Snoqualmie Falls, Olivia LOVED the waterfall and threw a huge fit when it was time to go. It was a long day and when we finally made it to the hotel in the early morning hours where we were all greatful to get out of the van.

Saturday morning Rob got up really early to go salmon fishing up in Canada. Grandma Elizabeth came over to help me with the little monkeys and we spent the day going to a sand castle competition and then back to the beach. The sand castles were amazing and Olivia had a great time dancing to the band there and playing in the gigantic sand box. We had our picnic lunch at the beach and then Olivia and Grandma went hunting for little crabs. Olivia still tells us that the crabs tickled her arms. Then we went back to Richard and Linda’s so that I could start getting ready for the reunion, which was the whole purpose of the trip. Rob made it home just in time to get ready and off we went much to Olivia’s dismay. Zachary slept the whole time we were gone so Grandma Elizabeth got off easy! It was great to see my old friends and catch up with them.

On Friday afternoon we went out to Birch Bay with Grandma Elizabeth and Grandpa Dave. It was beautiful! The tide was coming in but we got to try to build a sand castle in the sticky sand and dig for clams, which I was pretty good at with a plastic toy shovel. Then we spent some quiet time at Grandma and Grandpa’s house. 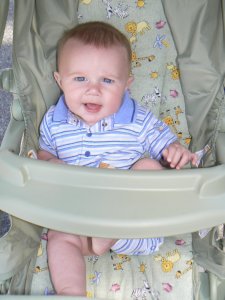 On Thursday we went to Bellingham to look for salmon but they werent coming in yet. We walked around the path and after seeing several homeless people decided it was probably not too safe to continue there. That night Rob went fishing with Richard and had a great time. They only caught two fish but that didnt seem to bother them much.

We got up in the morning and drove down to the Point Defiance Zoo. It was a perfect weather day. When you ask Olivia about the zoo she tells you that the musk ox pooped. Great memory! I really liked the polar bear, I had no idea how big they were. We had a lot of fun seeing the animals and fish. We drove home up Chuckanut and looked at all the pretty scenery. We stopped at the beach and took the long walk down to the ocean. Olivia liked throwing the rocks back into the waves. Then we went to Grandma Elizabeth’s and then out to see Grandpa Dave’s sisters horse get shoed. Olivia got to ride on the horse which was so fun to see! She loves horses. 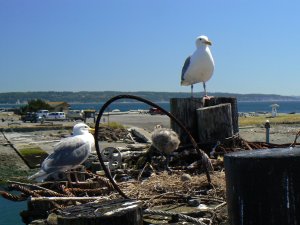 On Tuesday morning we started our drive over to the penisula. We stopped at Deception Pass and explored the beach for a little while. We then took the ferry over to Port Townsend. There was a seagull nest right on the piling next to the ferry so we got to see a baby seagull up close. The ferry ride was beautiful. Olivia enjoyed walking circles around the ferry. We went to a few antique stores in Port Townsend and then drove down to Silverdale. We stopped at the park in Silverdale and let Olivia run off some energy at the playground. Zachary went for his first swing ride with some help from Olivia. Then we checked into our hotel and enjoyed the pool. We didnt get any pictures of us that night since both Rob and I were in the pool but let me tell you it was a great time! We even got Olivia to jump into the pool and swim around a little on a pool noodle. Zachary watched all the fun from his carseat. The night in the hotel went okay, not something we will be doing all the time though. 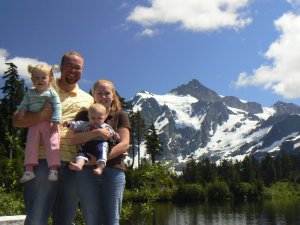 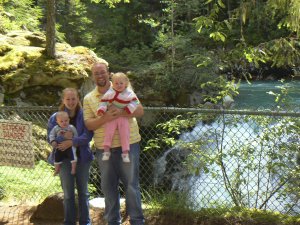 On Monday morning we went to Mount Baker. It was a beautiful day. We stopped at Nooksack Falls on the way up which was probably Olivia’s favorite thing, she LOVES waterfalls! The road up to Artists Point had only been opened on Saturday so there was still plenty of snow for us to play in. Olivia wasnt too impressed when she slipped. We waited for a while to see Mount Baker come out of the clouds and tried to blow the clouds away but it didnt work too well. We stopped at Mirror Lake on the way down. Olivia must have liked the mountains because as I was uploading these pictures she asked when we were going back!